Remarkably, fall and winter 2018-2019 will remain the hottest in the past 25 years! We have not experienced any significant period of frost. Rainfall, which remained very low, accentuated the phenomenon of drought. The entire 2019 season was marked by a water deficit.
In the spring, which remained relatively cool, it was not until the end of May or the beginning of June to observe a sharp and rapid rise in temperatures.
The bud begins to happen at the end of March, but the freshness of the first fortnight of April blocks the vegetative evolution. At the end of April, a welcome sweetness promotes a more intense growth of the vine.
On April 5 and 14, two episodes of frost caused some damage.
At the end of May, beginning of June, the shoot becomes more active thanks to milder temperatures, flowering begins between June 10 and June 20.
At the end of June, a period of strong heat causes an explosive growth and a very rapid enlargement of the berries.
We are experiencing a first heat wave phase between June 18 and July 7 with temperatures between 20 and 29 degrees.
Then a second phase arrives between July 16 and July 27, with a temperature peak at 38 degrees. The soils are very dry.
The start of veraison happens at the end of July and beginning of August. The significant heat of August emphasises the water stress; some berries wilt because of millerandage. At the end of August, most of the plots are at the end of veraison.
Harvests take place on September 13 with very sunny weather.
The crop is not abundant because the vine suffered from drought. There is little juice but grapes are perfectly healthy.
Elegant, the wines are endowed with supple tannins, a real freshness and an enticing fruity character. These are wines of undeniable delicacy.

2019 will remain an excellent vintage for aging, powerful and very harmonious.

From November 2017 to March 2018, the rainfall is high. Waterlogged soils require patience and you have to wait until mid-April to work the soils. In May, the situation deteriorated sharply with two weeks of almost continuous rain and 130 mm of water at Gevrey-Chambertin.
At the end of May-beginning of June, with the return of good weather, the flowering unfolds like lightning.
The high pressure settles permanently in July and August.
The harvest begins on September 3 in warm, sunny weather.
With more than 150 hours of sunshine compared to normal, 2018 is an exceptional year; the grapes « millerandés », reach degrees of intense maturity; quality is there to produce a great wine.
The wines of this vintage are ripe and gourmet with a base of freshness present from the attack to the finish.

January: cold and dry, this month lacks water; this phenomenon continues throughout the season.
February: mild and dry.
March: rainy.
April and May: very beautiful and warm, except for a risk of frost from April 27 to 29 which slows the growth of the vegetation but the temperature rises quickly and from May 20 the vine starts growing again quickly.
June: at the beginning of the month, this acceleration promotes rapid flowering in 4 days.
The temperature is 100°F for 10 days. There is a nice outflow of grapes around June 20.
July: it is very hot at the beginning of the month, which triggers thunderstorms, heavy rain and hail. This stormy weather lasts until the end of July. The veraison (change of color of the grape berries) starts in mid-July, a sign of an early vintage recalling 2007 and 2011.
August: the weather was gloomy and heavy, with an event of rain at the end of the healthy month as the harvest approached. Harvest start on September 6 under average, cool and cloudy weather.
The year of this vintage ends with a beautiful sunny late season worthy of an Indian summer.
This 2017 is characterized by its solar side due to the strong sunshine of spring and summer.
The wines reveal a great Burgundian classicism with their fruity bursting with great frankness, in perfect balance with acidity. The combination of this freshness and this elegance promises the best for aging!

A vintage full of surprises!

After a very humid winter, heavy frosts on the 27th of April caused severe damages, especially for the Premiers Crus and Grands Crus appellations. A dull, cold and rainy spring, halted the restart of the vines. However, in June, the vine caught up and the flowering unfolded in a good way. July and August are dry and the heat sets in from the 14th of July, to reach temperature around 30°C until the first days of September. We started harvesting on the 26th of September, with a sunny and warm weather.
The harvest is small but the grapes are very ripe and healthy. The wines they produced are today colorful and rich. 2016 is a vintage full of surprises, at the same time different and a beautiful challenger of the 2015 vintage. It will charm the lovers of great wines that respect the personality of their vintage.

This was an early ripening year, with fast blooming flowers, nice bunch setting, a long heat wave and a very dry summer. As a result, the vineyard produced small grapes with thick skins.
Plenty of rainfall, between the 10th and 20th of August, allowed us to obtain decent yields. The fruit was picked from the 3rd to the 11th of September, under sunny skies. The temperature was around 25 degrees and there was a pleasant breeze. Boasting excellent maturity and perfect pH levels, this will be a great year as the wines are powerful.

All of the elegance of the Pinot Noir variety

Winter was rainy, and the springtime hot and dry. Thanks to the heat of the month of June, the vineyard bloomed very quickly. The month of July was very humid, and nice weather appeared around the middle of August. Early September was warm and sunny, with mild night-time temperatures. The harvest took place from the 12th to the 19th of September.
The wines: They are surprising, with good tannins. At once tasty and flattering, they display all of the elegance, associated with the Pinot Noir variety.

Aged for many years to come

The temperatures were unusually high for the season during the months of March and April. The vines displayed early and regular growth. But a 3-week cold spell appeared during the month of June. As a result, the vine’s growing cycle slowed down. The summer was wet and humid, and fine weather did not show up until the 10th of September. It did however last for 3 weeks, thereby helping the grapes to ripen.
The harvest started on the 3rd of October and lasted 10 days, during a cool and humid period.
The wines: Despite difficult weather conditions, we discovered great things in 2013. Indeed, the tannins were supple, silky and well-ripened. Concentrated red berries come to the fore. This is a good year that can be enjoyed in its youth, as it is very flattering, and thanks to its nice acidity, it can also be aged for many years to come.

Unusual springtime weather Spring arrived early in 2012, resulting in a quick bud burst around the middle of April. This was followed by a cold spell, which in turn slowed down the growing cycle. Cold and humid weather conditions persisted during the flowering period. This situation produced shattered grape berries, thereby reducing the size of the harvest. The full flowering of the vineyard occurred around June 12, suggesting that the crush would take place at the end of September.
Beneficial conditions at the end of summer
From the end of June through to mid July, high rainfall threatened to cause mildew. As a result, we had to carefully monitor the state of our vines to eliminate the development of diseases. Thankfully the weather finally improved however cold night-time temperatures led to cases of oidium. Here again, we had to regularly intervene in the vineyard to maintain the high standard of quality of our grapes. At the end of August, the return of fine weather conditions allowed the fruit to ripen in a healthy environment.
Quality fruit, offering the prospect of an excellent vintage
Picking began on September 22, marked by unfavorable weather conditions. However, we were pleasantly surprised by the quality of the harvest. Little sorting was required and many bunches had shot berries. As it turns out, the grapes’ natural sugar levels were very high and their tannins were well-ripened. The first analyses from the laboratory indicated that the fruit was well-balanced. Following a cold week-long maceration, we immediately noticed that the color of the juice extracted from both the red and white grapes was especially intense. The wines were produced fairly quickly and without difficulty. Their fresh and fruity aromas, as well as their elegant tannins, indicate that this is an excellent vintage. In addition, the wines boast impressive density and good length, thereby gradually revealing intense and fleshy fruit flavors.
One cannot but recognize that 2012 is small in terms of volume, but great in terms of quality.

Bud break was very early. Bud nipping and suckering began on the 26th April. The heat and dryness of April, May and June caused the grapes to ’stress’…
Vine growth slowed down leaving us concerned that we might have small clusters and very little harvest. Fortunately, at this stage of the vine’s development, no disease set in and the canopy remained intact. Then from the 20th July, it rained for a month with the water being soaked up by the vines. It became imperative to intervene as the sanitary state of certain plots deteriorated. In order to preserve the harvest, a team was sent in to cut away the damaged clusters; a de-leafing also enabled the grapes to breathe. In under three weeks we had everything under control.
The weather got better and the heat and sunshine encouraged ripening. On the 1st September the harvest could begin. An initial team of pickers carefully sorted the grapes in the vineyard. A second team, then, sorted the grapes on a table as they entered the cellar. At the end of the day, the wines showed very good phenolic maturity and excellent acid/alcohol balance. They had colour, were fruity with supple tannins and a long and crisp mouth-feel.
In January 2012, at this stage of the wine-making process, the malolactic fermentation has still not begun, which is a great sign for the ultimate body of our wines.
Finally, and considering the complex weather patterns of the 2011 summer, it remains to say how pleasantly surprised we are by the quality of the vintage.
It is very promising. We cannot repeat it enough; our vigilance and the seriousness of our vineyard work throughout the year enable us today to await, hopefully, remarkable wines.

The harsh and snowy winter allowed the soils to rest. And then the springtime arrived, offering sunny, warm and dry conditions. The vines’ growing cycle started earlier than usual, indicating a harvest ahead of schedule. But the cold and rainy weather during month of May slowed down the growth and led to the uneven blossoming of the vines. These conditions ended up producing shot berries, suggesting a small harvest.
July and August were gloomy months. It was therefore necessary to pay twice as much attention to the state of the vineyards to produce grapes of a high standard of quality. Attention was especially paid to leaf fining, to avoid rot and to expose the grapes to sunlight, in view of favoring their ripening.
The use of these techniques set the scene for a top quality harvest.
Once again, the month of September benefited from 15 days of generous sunshine, spoiling both us and the grapes alike! The ripeness of the harvest was surprising. It produced strongly colored and extremely fruity wines, with good rich and well-balanced matter, as well as instantly round tannins.
All of these characteristics are the sign of a very promising vintage, extremely Burgundy in style! 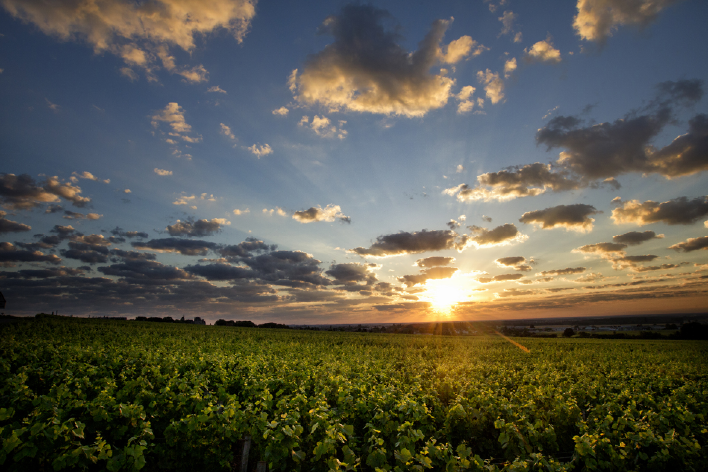